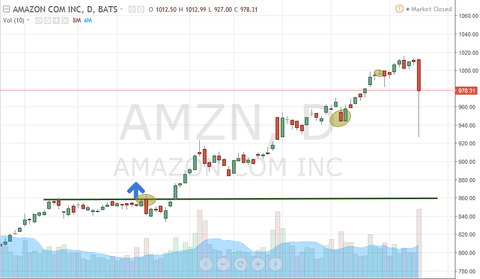 We have been quite vocal about our bullishness on Amazon this year. So much so, that we posted our Game Plan for our potential AMZN Long in our free trading blog. (As you can see below.) 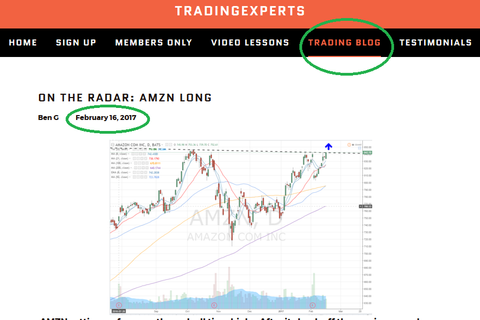 (We cant click the button for ya)
Now, when we were buying Amazon through $860, did we think $1,000 was in the cards? No shot. We thought a move to $875+ was much more realistic. However, we're not going to mitigate our upside just because a stock hits a price target. We primarily focus on our downside risk and let our winners continue to work for us, because there is no telling how much they may run.
After a $100 move in just a week, we knew we had good stock on our hands, so we wanted to let that winner run. At this point, we were willing to give it all the way back to our price because after the price action it has shown, you know there is some big money driving this stock higher.
Every time you turned on CNBC you'd hear "When will AMZN be a $1000 stock?" We knew the psychological level of $1000 would be a big one. Knowing this, I personally took some profit after a move up to $970 began to roll over.
A wise old trader used to say, "Ya can't go broke taking profits!" So, getting stopped out for a $110 point profit in a few weeks isn't the worst problem you could have.
After it broke $1,000 the talking heads on CNBC were pumping Amazon (as they do with most stocks when the move is over) so we waited to see how the $1,000 level would react.
Would it blow through $1000 and be up $20 points? Would it tag it to the penny and become a resistance level? Would it fail miserably before ever breaching the level? So, we watched the breakout but refused to buy when we saw there was no volume. It breached $1000 and spiked a bit but didn't show any real momentum. So by the end of the day, I closed out the rest of my swing from $860 at $997 for a $137 point gain per share from a 3 month swing trade.
Now did Amazon trade higher? Yes it did. It traded $16 points higher in the next few days just long enough for dumb money to pile in.
There is a very popular saying "New Investors tend to arrive just as the party's winding down. They miss out on gains and take part in all the losses..." 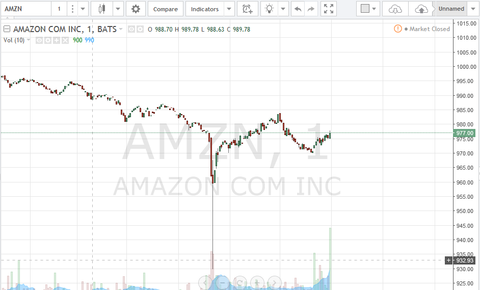 Now did we know a week after we closed a 90 day swing trade that Amazon would reverse almost half its 90 day move in a few minutes? Not a chance, there's no way we could ever know that. However we had a plan, we modified the plan with what the market was showing us, and caught a majority of the move. Our risk was $20 per share to make $110 (selling half the position at $970) and $137 (selling the rest at $997) per share on that swing.
Now we always hear rookies say how they will buy when it gets scary, and this a prime example at how difficult it is. We don't trade off 1 minute charts, however to show you how fast the crash was, you would have to be in front of your computer at that exact minute to buy into that flush. I will tell you from experience in real time, the stock is moving so fast and the spread can be 5-10 points and changing every second that anyone who got filled down around $930 was 1 of 3 things:
1. A limit buy (bid) that was randomly way down that luckily got hit
2. A super lucky trader throwing in a market order at the exact second
3. A wizard
We don't trade that way because that is usually pure luck. Were we lucky to have gotten out when we did? Maybe a little bit lucky, but above all else we were calculated.
Overall, this was a great trade for a few reasons. Besides the nominal gain, we have great psychological aspects of this stock covered. We took part in the momentum when it was easy money, and got out just before it became tough money. We didn't have to go through the downside headache of the flash crash and have a huge cushion in the name from a P&L standpoint. That means we're avoiding the stock for now as it chops around and is difficult on traders. We'll be sitting on the sidelines with a bucket of popcorn waiting for a proper setup to form to load the boat once again.